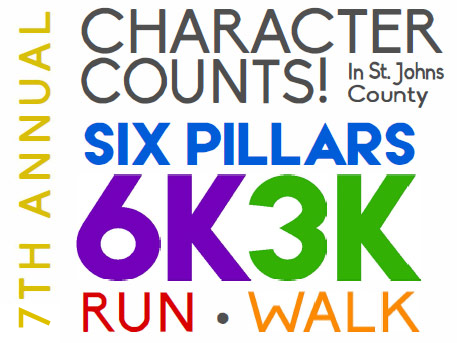 The CHARACTER COUNTS! Steering Committee is calling all walkers, runners and fitness enthusiasts to participate in the CHARACTER COUNTS! 6 Pillars 6K/3K Run/Walk on Saturday, February 2, 2019 at 9 a.m. The run/walk will begin and end at Palencia Elementary School located at 355 Palencia Village Drive, St. Augustine.

Walkers and runners will enjoy a course running through the neighborhoods of Kensington and Las Calinas and can choose to participate in the 6K (3.73 miles) or 3K (1.86 miles) distance. Registration fees are as follows:

Race proceeds will support CHARACTER COUNTS! initiatives throughout the St. Johns County School District (SJCSD). The run/walk is open to all ages, and the top three winners will be awarded in each of the age categories as well as the overall male and female finishers. A cash donation will be awarded to the top three to five schools with the most registrants. Last year these schools were Ocean Palms Elementary, Alice B. Landrum Middle and Valley Ridge Academy. All race registrants will receive a tech t-shirt and lots of other goodies from area businesses and organizations. At the finish line, each race participant will receive a commemorative dog tag which is the fifth design in its series.

This event is produced by the CHARACTER COUNTS! Steering Committee and is presented by Beaver Toyota with support from businesses and community groups. Action News Jax CBS47/FOX30 is the official media sponsor of this run/walk.

The SJCSD, along with area businesses, youth organizations and civic groups, selected the national character education program of CHARACTER COUNTS! as a countywide initiative to instill positive character traits in young people throughout the county. Additionally, the SJCSD became the first school district in Florida to implement Pursuing Victory With Honor in all of its athletic programs. Character education is an important part of every School Improvement Plan and a major component of the Student Code of Conduct and the school district’s Strategic Plan.

Filter News by Type of Media